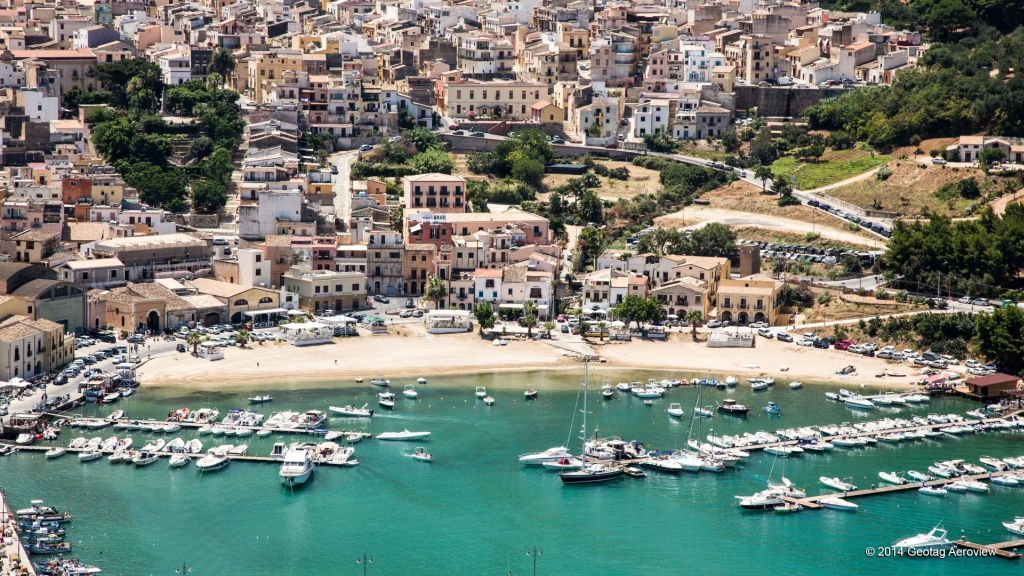 Castellammare del Golfo, according to the almost unanimous opinion of historians and geographers, born as Emporio Egesta (today Segesta). The place, that is, where the Elimi - peoples descended from the Trojans, who settled on the river beaches Crimiso (now the St. Bartholomew), having obtained the Sicani part of their territory - exercising their trade with foreign ships.
In 416 BC Egesta and his Emporio experienced the daring bellicosity of their eternal enemies, the Selinuntini, when besieged by sea and by land, now forced to ask for help to the Athenians, now the Carthaginians. And right on the banks of Crimiso it was fought one of the bloodiest battles between Egestani and Sicilioti.
The history of Castellammare to the Arab rule 827 AD, is the story of Egesta because, as his Emporio, underwent the same events.

Having to be the Emporio a landing point of ships, a safe place for the export of wheat (intended for all countries of Sicily and southern Italy), and at the same time partway through a line of defense, had to have the fortifications to protect the trade from pirates and to defend the city from enemies.
It was very important in the Carthaginians, who made it an important point for trade.
The Romans considered because they wanted to seize the important Emporio for the grain trade, a safe place for boarding and disembarkation of soldiers, its own harbor to shelter ships. It is thought that the Romans fortified whole golfo.Quando defeated the powerful rival (Carthage) Egesta declared free city and nell'emporio (Castellammare del Golfo) manufactured barns and I kept lively trade.

Egesta ceased to exist with the arrival of Arab invaders; the destruction it had increased Calatafimi and Emporio the Egestani, whose Arab voice was called "Al Madarig" (the steps). It is believed that had this name from a long flight of steps from the mountain (the Scales) suited to the sea, or perhaps even the current staircase from the ancient maritime port (at the bottom of the current King Frederick on) leads to the harbor.
The Arabic increased agricultural and commercial activities, founded traps in the Gulf, rebuilt to Cetaria (Scopello), extended the cultivation of vines and olive groves, especially in locations Fraginesi. The Saracens do not widened the Emporio, but formed here and there small villages, where they dedicated themselves to the cultivation of the fields (Fraginesi, Bath, Inici of Balata, Balata di Baida).
I Saraceni non allargarono l’Emporio, ma formarono qua e là delle piccole borgate, dove si dedicavano alla coltura dei campi (Fraginesi, Bagni, Balata d’Inici, Balata di Baida).

Probably the castle and fortifications were destroyed during the barbarian invasions; But the Arabs erected a fortilizio.Dell'epoca Norman-Swabian (1071-1282) have reached us little news. Roger, landed in the diocese of Mazara, began pounding the province and soon surrendered twelve castles and gave it as a fief to his captains. Among these is believed to have been Al Madarig, which was given in fief to the family Iron Salurnio.
It is believed that even under the Normans, Castellammare has kept the name of Al Madarig, who traps and that it played a good business. The Swabians fortified Al Madarig and probably they were the ones to build a castle by the sea; and it was from then that he began to be called "the castle in the sea." In the Aragonese period (1282-1410) Castellammare was a feud. In 1282, during the Sicilian Vespers, Castellammare rose up to kick the hard Angevin yoke and passed under the Aragonese dominion.

The Palermitani, taking advantage of the order given by Frederick to destroy the fortifications of Castellammare, had sacked and fire and after destroying everything, asked the king, as a reward of lent, which were forbidden any kind of export of grain from the port of Castellammare (jealous of the activity that took place there).
Frederick II to punish Castellammare she was too weak to the Anjou, he granted Palermitani what they asked and the agricultural and commercial development of the city stopped.
Following Peter II of Aragon, who succeeded his father, he gave back to Castellammaresi the right to export grain, because though of 4 tari a corpse for wheat and two for barley tari.
In the period between the fifteenth and eighteenth centuries, nothing happens remarkable. The city again became one of the main points of the grain. Between 1521 and 1599 the Cathedral was built.

In 1718, when war broke out between Philip V of Spain and Amedeo of Savoy for domination of Sicily, five ships of the English fleet, coming to the aid of Amedeo, they came to our bay to do the reconnaissance.
Lord of Castellammare was at that time the prince Hake, who, being pro-Spanish, blew from the castle cannon fire against the enemy fleet.
The British then abandoned the city and Castellammaresi, terrified, fled to the fields imploring the help of the Virgin del Soccorso.
Shortly after the enemy ships stopped the bombing and withdrew.
The people said that the Virgin had made a miracle and many swore to have you seen with a bat in his hand wrapped in a divine light, leading a large army as he came down from the mountain of scale, thereby discouraging the English.
Following Castellammare was occupied by a Spanish garrison; the Spaniards were defeated and was recognized King Charles VI of Austria.

In 1820, Castellammare voted for independence of Sicily. In 1848 it was one of the first cities that hoisted the tricolor flag.
The people were divided into two parties: "surci them" (Bourbon) and the Liberals. These were the soul of the Liberal Party: Bartholomew Asaro, Jerome Asaro, lawyer. Joseph Borruso (then deputy to the Italian Parliament) and many others.
When the news that on April 4, 1860 Palermo had risen, on the 6th day, the house of Bartholomew Asaro he raised the flag and all the people cheering went to the Cathedral, where it was sung the Te Deum. They continued then the conflicts between liberals and Bourbon.
Here, later, they landed other volunteers led by Giacomo Medici.

On the evening of June 22, at 9 am, they arrived in our waters steamships Washignton, Oregon, Franklin. The people thought they were the Bourbons, but when they saw the tricolor flag, broke out a cry of joy. The next day, at 2 o'clock, he came to Castellammare Garibaldi to greet new volunteers. It was housed in the home of Bartholomew Asaro, from whose balcony pronounced warm and heartfelt words and then set off on a boat, to Balestrate.

The column simultaneously Doctors went to Palermo. But the Bourbons were trying to excite the minds and caused that broke out in 1862 in Castellammare revolt hard. L '1 January many shepherds and peasants armed with a red flag in his hand, shouting: "Down with the lever! Down with cappeddi! Long live the Republic!", While the sound of a bitch called his teammates.

The city became a desert; people barred the doors. Some, like G. Fundarò and dr. Borruso Francis, went to meet the insurgents to urge them to desist, but all was in vain. Francesco Borruso was shot. Everywhere they attacked, destroyed, burned. Eventually the insurgency was quelled. Consequence of the uprising of 1862 was the robbery, that afflicted Castellammare until 1871.
At the head of the robbers there was Pasquale Torregiano, which, after the uprising above, it gave to the campaign with a group of killers. The crags of the mountains surrounding Castellammare are witnesses of their vicious deeds.